These Peach Melba Cupcakes are based on the classic Peach Melba dessert. Fabulous raspberry and peach cupcakes with a creamy vanilla frosting. 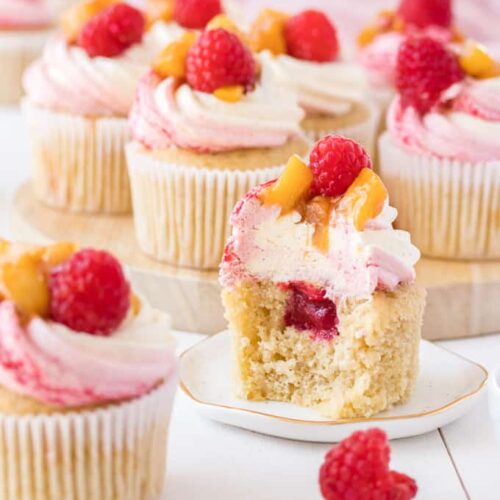 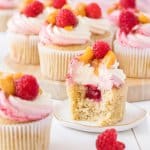 These cupcakes combine gorgeous, bright flavours and all my favourite elements of a cupcake. Hello fluffy cupcake, hello surprise centre and, why yes, hello there super creamy frosting. I went one step further with these though and made a three-tone frosting and I just adore the colour and fun of these little handfuls. Don’t they just make you smile? 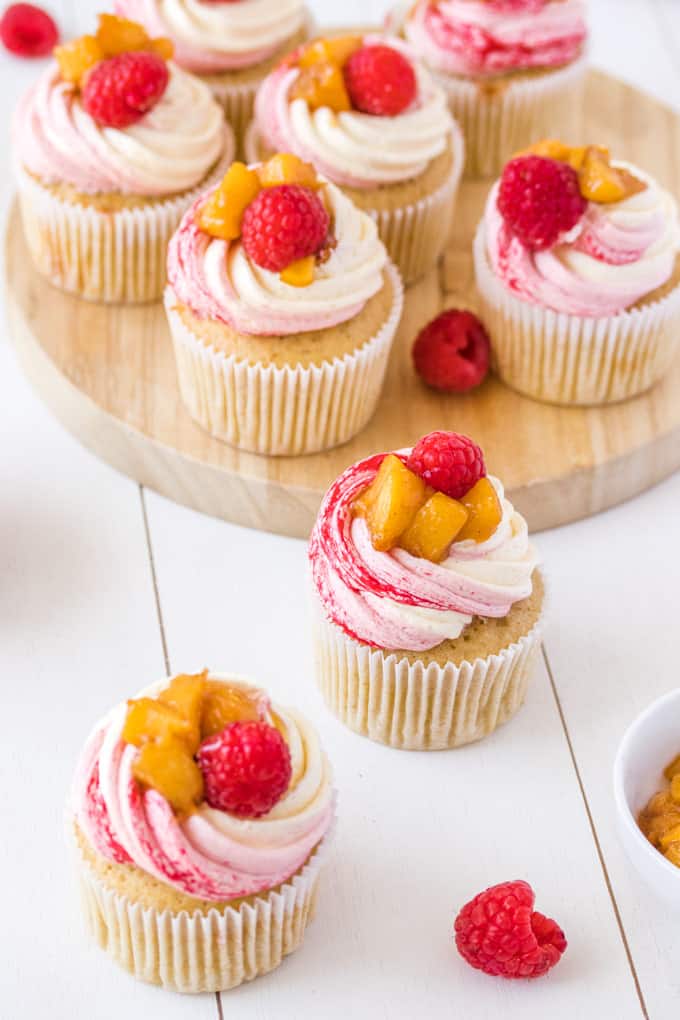 DIFFICULTY – Easy, but plan ahead as there are 4 components. You could simplify – see my substitutions list below.

MAKE AHEAD – Yes. You can make the peach cupcakes ahead of time (2-3 days in the fridge or up to 3 months in the freezer). The raspberry filling can also be made 2 days ahead. 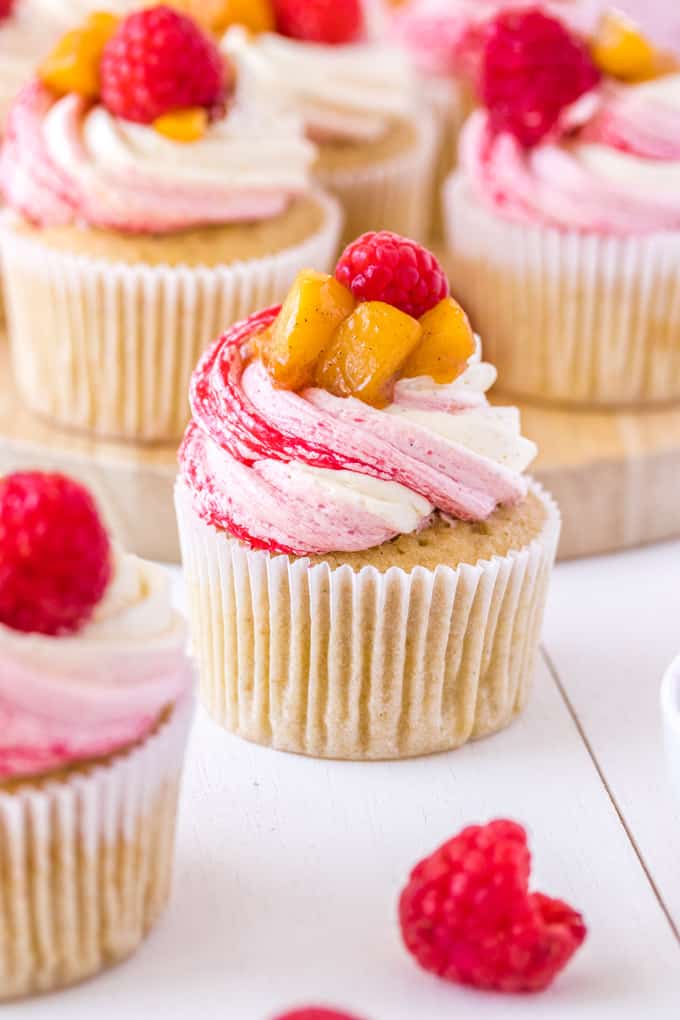 What is Peach Melba?

Peach Melba is a classic dessert of ice cream, peaches and a raspberry puree made famous by a French chef when he created it in honour of Dame Nellie Melba – a much accomplished Australian opera singer. The dessert, just like Dame Nellie has travelled the world and it’s fresh and simple flavours are absolutely sublime.

This cupcake is made up of 4 components – one more than the original dessert itself.

How to make Peach Melba Cupcakes

The batter is based around my favourite Perfect Vanilla Cupcakes recipe but this time I added in some peach puree. This puree doesn’t give a strong flavour of peach to the cupcakes but just a little hint. You could leave the peach puree out and just increase the milk to 3/4 cup if you prefer. 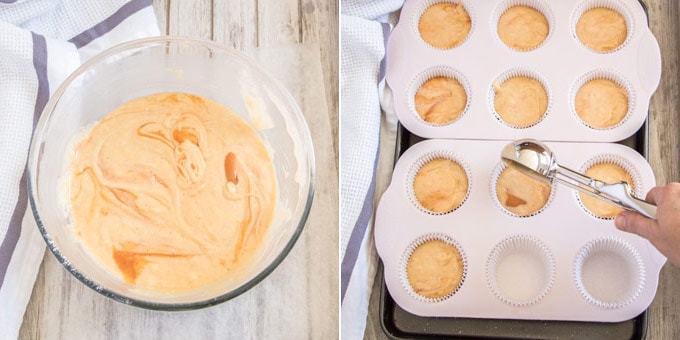 The last of the peach puree gets swirled through the batter but try not to leave any big blobs of it, or the cupcakes may not cook properly in those spots. I use a medium ice cream scoop to portion my cupcake batter and I love using these silicone muffin trays for their shape and flexibility. 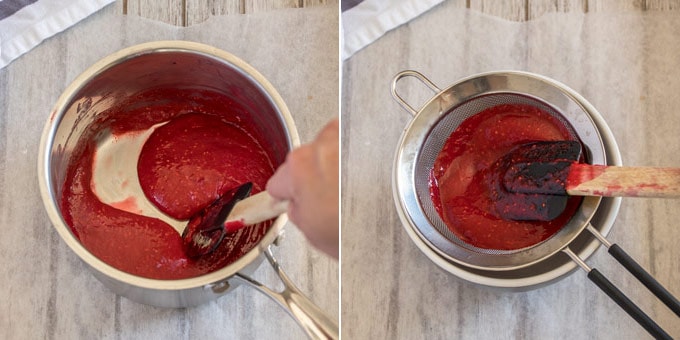 The raspberry puree is simple to make. It gets cooked on the stove for a short time with some corn flour (cornstarch) added, to thicken it up. This way it holds up nicely inside the cupcakes without soaking into the cake. I also like to strain out the seeds.

I use a cupcake corer to cut holes in the centre of the cupcakes. Feel free to use a small sharp knife but I find the corer much quicker. Then fill the holes with the thick raspberry puree and push a little piece of the hole offcut back on top to seal it all in. 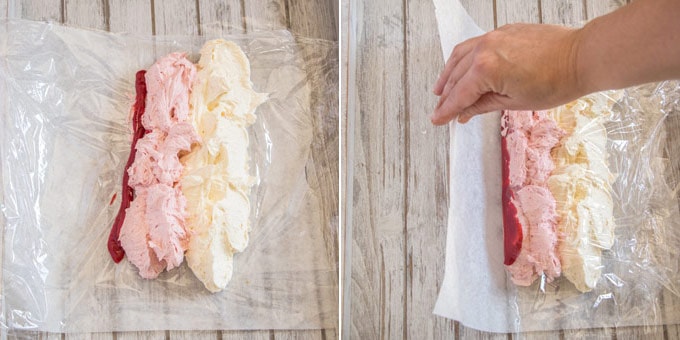 Lay out a sheet of baking paper, then a piece of plastic wrap on top of that. Put the white frosting in a thick line down the centre. Next to that, add the pink frosting, then pipe a line of raspberry puree at the end. Fold one side of the plastic wrap over the frosting then use the baking paper to help you roll it up. 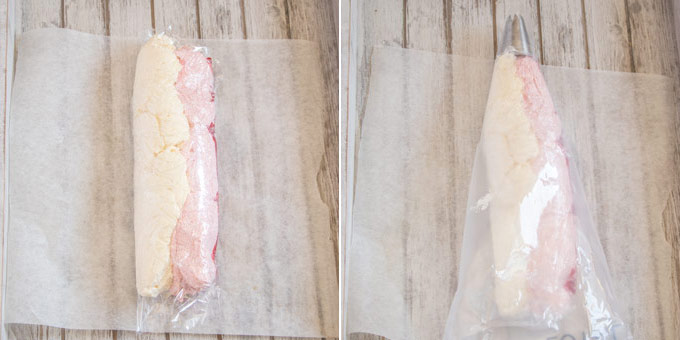 Once you have the frosting all rolled up, prepare a piping bag with a star tip and slot it the whole frosting log into the piping bag. Now just pipe as you would normally. 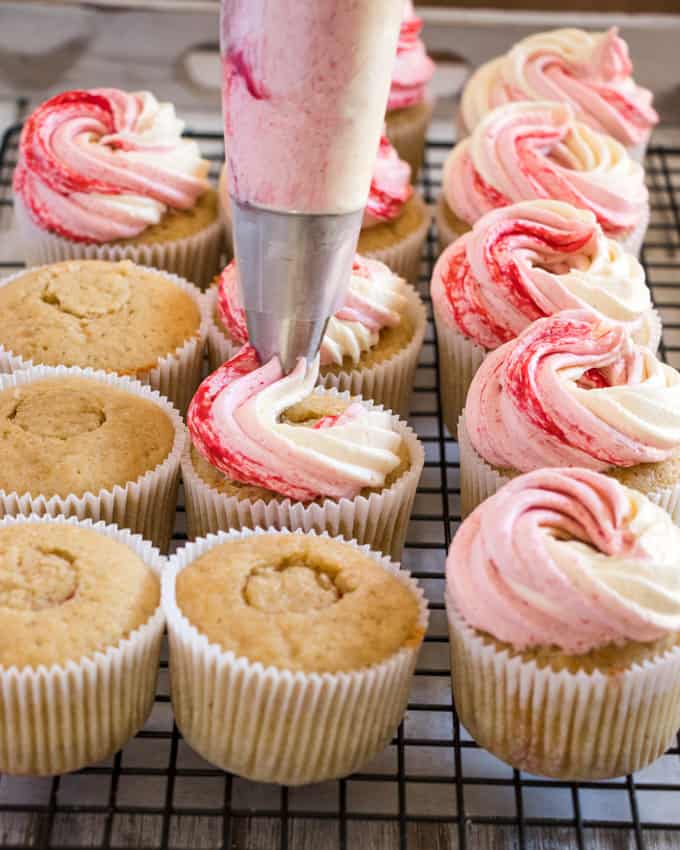 Impressive but impressively easy too.

Want to save time? 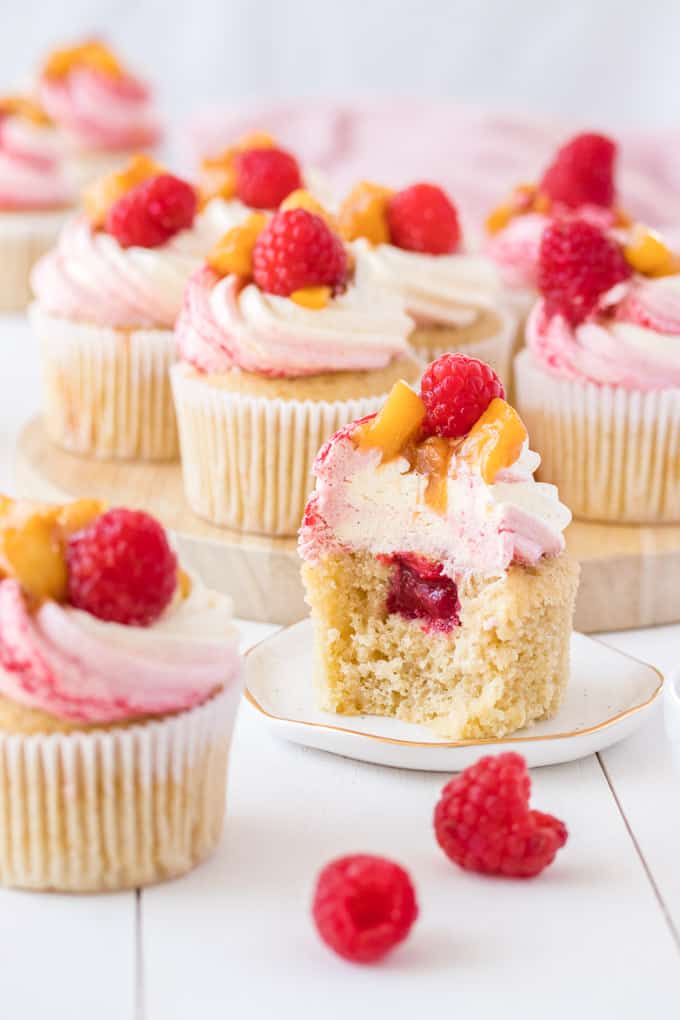 The flavour of these pretty Peach Melba Cupcakes is fresh and fruity but also delectably creamy. Total decadence and they’d be perfect for a girls birthday party, Mums birthday or mothers day if not just ’cause. 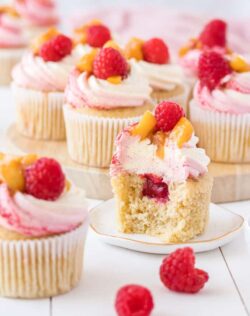 FOR THE RASPBERRY PUREE

FOR THE WHIPPED BUTTERCREAM

FOR THE PEACH TOPPING

FOR THE RASPBERRY PUREE

FOR THE STEWED PEACHES

CHECK OUT ALL MY CUPCAKE RECIPES HERE

Calories: 441kcal
Author: Marie Roffey
Course: Afternoon Tea, Dessert, Sweets
Cuisine: Australian, cupcakes, Various
Have you tried this recipe?Don't for get to leave a rating and comment below and let me know how it was! I love hearing from you. 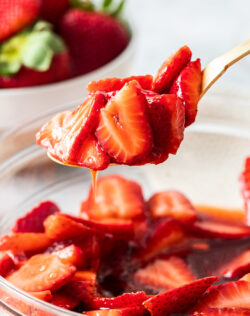 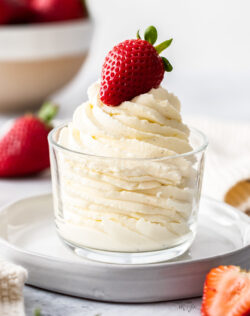 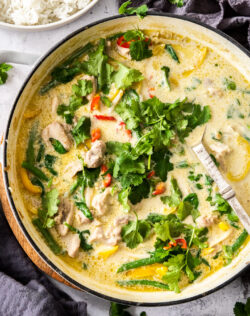 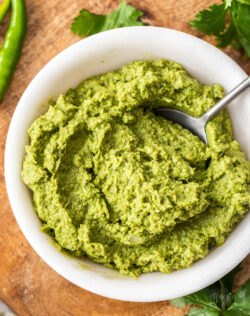